A 17th century wreck rose above water level in Co Kerry for the first time in nearly 50 years this autmn. Connie Kelleher, one of the State’s three underwater archaeologists, headed down immediately, says John Verling.

There is freshly broken pottery lying on the wet sand. The bottom of a brandy magnum appears too, the dark glass shining in the morning sun. All part of the cargo from a 17th century wreck being excavated by the Underwater Archaeology Unit, at the edge of where the sands meet the sea at Ballyheigue in North Kerry.  It is the last neap tide of the year, nearly midday and time is against the team doing the digging. In less than an hour the spot where we are standing will disappear until early spring. 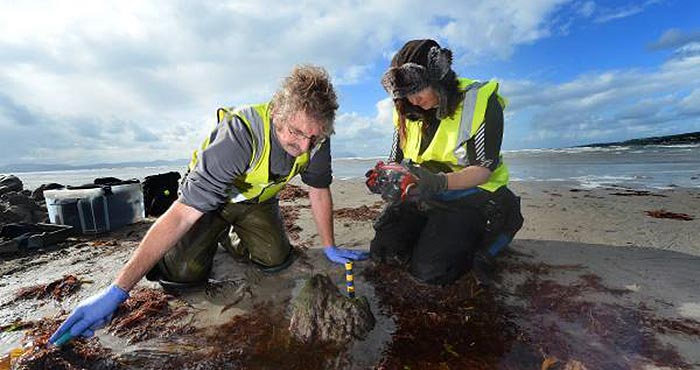 Connie Kelleher is leading the excavation for the Underwater Archaeology Unit (UAU), part of the National Monuments Service (NMS). The brief of the NMS is to advise the Minister on the management of Ireland’s built heritage and its underwater cultural resource. There are 34 archaeologists within the service but Connie is only one of the three underwater specialists. Ireland has a long maritime tradition, over 17,000 documented wrecks alone, and the three fulltime archaeologists are very busy.

“We’re not just interested in wrecks,” explains Connie, “but all of our underwater cultural heritage. There is a diversity of sites and artefacts dating from prehistory to the modern era, all are important for our understanding of past human activity. What lies underwater and around our shores tells us so much about how people lived, worked, travelled, traded and settled in past times. ”

Assisting Connie on this dig is a team from local archaeology firm, Laurence Dunne Archaeology who have valuable knowledge of the area. The team has to carefully record the site before and during excavation. This is a difficult dig given where the wreck lies. When the ship beached, the ballast of quarried stone would have shifted, toppling her over and burying that side in the sand. Under the ballast lies the cargo of pottery, wine, brandy and ceramics, preserved in the sands for the last two centuries.

“This is a time capsule” says Connie, “sealed since the ship stranded. It is now a window into our maritime past which we are peeking through, trying to investigate what happened to the ship, its cargo and its crew. Also we are trying to protect this very delicate and fragile heritage from damage, decay and loss.”

What is worrying Connie and the team is that the pottery is freshly broken. This would indicate that someone has been digging at the wreck lately and amateur, unsupervised digs can do a lot of damage.

“All wrecks over 100-years old are afforded protection under our National Monuments Act,” explains Connie, “What we are doing here is being carried out under licence, in a scientific and controlled way. It is an offence to search for or interfere with archaeology, whether a site or artefacts, without a licence from the State.”

The tide turns though and quickly makes its way across the beach.  Today’s discovery is marked by Laurence Dunne using GPS as the shifting sands would bury a site, making it almost impossible to find next time. The exposed wreck needs to be protected and the team starts to replace the stones they had so carefully dug out only minutes earlier. With the winter storms the site could be destroyed before the next neap tide in early spring. Having such little time, maybe an hour that morning, is heartbreaking for them. This is all part of the job for the Underwater Archaeology Unit and the team from Laurence Dunne Archaeology but they can’t hide their disappointment.

At the promenade I look back at where we stood less than a quarter of an hour earlier. It is underwater, buried until nature allows the unit go to work again next year. Tomorrow there will be another site somewhere else. Connie is constantly up and down the southwest coast excavating wrecks and logging new discoveries. Along with other members of the unit, she regularly gives talks to the public. It is an opportunity to interact with people and get them involved. At a recent talk she was told of an undocumented wreck; at another of possible storm damage to a landing site. Vital news.

“We should see our maritime heritage as a resource,” says Connie, getting into her car, “but it’s finite, when it’s gone it’s gone.”

This website uses cookies to improve your experience while you navigate through the website. Out of these, the cookies that are categorized as necessary are stored on your browser as they are essential for the working of basic functionalities of the website. We also use third-party cookies that help us analyze and understand how you use this website. These cookies will be stored in your browser only with your consent. You also have the option to opt-out of these cookies. But opting out of some of these cookies may affect your browsing experience.
Necessary Always Enabled

Any cookies that may not be particularly necessary for the website to function and is used specifically to collect user personal data via analytics, ads, other embedded contents are termed as non-necessary cookies. It is mandatory to procure user consent prior to running these cookies on your website.